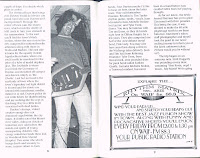 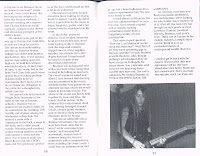 Here's an article from the July 1992 issue of Imminent, a zine from Cincinnati. The second half of the article is a review of an early BRAINIAC show at Wright State's Rathskellar. The first half is probably the most accurate portrait of Dayton, Ohio and what this town is all about that I've ever read. If you click on the scans to the left, you'll see them in more readable, full-size versions, or you can read the OCR transcription that follows:

Sixty miles to our north lies an area you could practically call Cinti’s northernmost suburb. In reality, the town could be more aptly referred to as the Queen City’s illegitimate sister city. Violence, crack and prostitution run rampant in the mean streets of this community. The town leaders are not the Mayor, Sheriff or County Prosecutor as it is here. They are gangsters, outlaw bikers and organized crime thugs. Street gangs have controlled the turf up there since the 1950’s, decades before Los Angeles made the gang scene fashionable.

Unless you hail from another section of the country or you’re suffering from organic brain damage, you’ve probably figured out I’m talking about Dayton, Ohio. Unfortunately, many Cincinnatian’s are quick to unfairly judge our northern neighbor, and this judgement is generally passed on the basis of misleading, inconclusive evidence. When passing through Dayton on 1-75, Cinti. folk love to laugh at what they see of the downtown area from the highway (You call that a skyline? Ha!) They laugh even louder at Dayton television broadcasts (Hey look, another Gun and Knife show at Mara Arena! Har, har!). The sad truth is, most of these pompous, misguided fools have never spent enough time in the place to properly evaluate it. If only they would make that 60 mile journey north and get out of their cars they might get a chance to taste the Gem city’s own special blend of urban decay. (This city has Chris Collinsworth and Simon Leis. Dayton has a never ending supply of dope. You decide which place is cooler).

The chemical haze that hangs over Dayton would do Mexico city proud (and who says Dayton ain’t metropolitan?) Through the center of town runs the Miami river, which rivals the ability of Mill creek to turn your stomach in the summertime. To the west you’ll find the town's black section where the race riots in the '60s competed for national media attention along with those in Watts and Harlem. The east side is home for the equally violent Appalachian slums, where one could easily be murdered for the price of a tube of model airplane glue. The Southside is where you’ll find the University of Dayton and its fabled off campus urea known simply as "the Ghetto." Last but not least is the northside of town where the town’s legendary red light district is located and the streets are littered with hypodermic needles. Believe it or not, Dayton police do not write tickets for skateboarding and jay-walking like the cops in this burg; they're a little more concerned with dead bodies.

Dayton’s strange, violent, creative energy does not remained caged within the city limits. It climbs out of the Miami river valley, riding on clouds of industrial soot, and infects the minds and spirits of young unsuspecting children. This energy sometimes lands these kids in Woodland State Mental Hospital. This same vibe which brings death and insanity to some, inspires others to form bands. Four Dayton youths I’d like to focus on here chose the latter route. They call themselves Brainiac. Brianiac is: Tim Taylor rhythm guitar. synth., vocals, Juan Monasterio-bass, Michelle Bodine lead guitar, and Tyler Trent drums. You may be familiar with Tim and Juan, as they did reside right here in Clifton Heights for a few years. They also comprised one half of the now defunct metal band, Pink Lady. You may also have seen them doing a stint in the Wizbongs (also defunct) [NOTE: the band is actually the Wizbangs, but when the OCR software rendered it as WizBONGS, it just seemed too perfect!]. juan and Tim hail from Kettering. Drummer Tyler Trent, from Beaveraeek, once pounded skins for punk band called Sunken Giraffe. Guitarist Michelle Bodine, a Trotwood resident, has never been in a band before (you couldn’t tell it from her playing, though).

As far as I know, the newly formed Brainiac has yet to grace Cincinnati with their presence. This being the case, it was decided to make the 60 mile pilgrimage north to see these folks live. Imminent’s editor, staff photographer and myself took the quest in our never ending journey to inform you of the latest unknown talent. (Where would you be without us?).

The trip began on an ominous note. Scott Haggerty was pounding on my door, screaming "Hey Kevin, oops! I mean, hey Mario! We’re going to Dayton to see Brainiac. Be at my house in one hour!” Inside my pad, I was on my knees, dry- heaving up the remains of a three day holiday weekend. I finished vomiting (in a manner that Charles Bukowski would applaud) hopped in the shower, and showed up promptly at the editor’s house.

We smoked some pot on the way up to Dayton, but it did little to curb my hungover nausea. The carbon monoxide leaking into the car from the broken tailpipe sure didn’t help matters much either. Also, it was raining and we were sailing down the highway on bald tires without windshield wipers. At that point in time, a safe warm bed in the Betty Ford Clinic held much more appeal than watching problem children make noise on instruments. But I had a job to do, so I knew my obligation to the public outweighed my selfish concerns.

We arrived safe and sound at Wright State University (a few miles to the east of Dayton, actually). Brainiac was to perform in the student center. As we walked into the building, I felt horribly out of place among the wholesome college kids. We entered a room with a commisary to the back, a stage to the front, and a video arcade outside. Watching well scrubbed youths wasting quarters on the video games, I noted that the place was so lame it made the Rhine Room look like CBGB’s. Juan and Tim graciously greeted us at the door, which made me feel a bit more welcomed.

The band set up and I looked about the place waiting for Marcia Brady to appear. Luckily she didn’t, but as it grew time for the music to begin, longhairs, punks, and a few assorted weirdos wandered into the room.

In my shaky, poisoned sickness, I had decided, before the band even hit its first note, that I wasn’t going to like it, Brainiac took the stage and violently slapped me out of my negative mindset. My attitude did a 360 degree turn and I found myself having fun in spite of my discouraged disposition.

Brainiac was kicking real wild with a psychotic tribal energy that seemed to be falling on dead ears. The crowd remained seated and silent (I later learned that dancing was not permitted in the room). Michelle Bodine had guitars set on alternate tunings which she would switch to from time to time. The chaos of the sound was firmly held together by Juan and Tyler, the band's rhythm section. In the center of this audio turmoil stood Tim, offering deranged, flanged vocals, choppy guitar rhythms, and occasional Moog keyboards (Realistic; made by Moog).

Tim did an admirable job as Brainac's frontman. The crowd may have been calm, but he wasn’t while executing hyper kinetic, unchoreographed movements, reminiscent of someone being electrocuted. Imminent’s editor commented on them sounding like Sonic Youth. I could hear an influence from that group, but I heard influences from various experimental late 70’s new wave bands as well.

I could almost call Brainiac the best new unknown band I’ve seen this year. Good sounds coupled with a visually exciting performance make them a happening worthy of your investigation.

This raises a good question, 'How can I, an Imminent reader, check this band out?’ Well, first of all, they have upcoming gigs in Dayton, and like I’ve said, Brainiac is worth the drive. Also though nothing’s yet scheduled, they do have an eye on Porkopolis for future shows. You could also send away for the four song demo cassette they have out. The cost is unknown, try writing Brainiac at P0 Box 703 WWB Dayton, OH 45409-0703.

So, anyway, next time you find your pseudo-intellectual, neo-metropolitan selves looking for joke fodder, leave Dayton out of it. After all, the Gem City has brought us such greats as Paul Lawrence Dunbar, Jonathan Winters, Brainiac, and yours truly. Think not of Dayton as the violent, industrial armpit city it can be; think of it as an overlooked mecca of underground wealth that it is.

[editor's note] I couldn’t get in touch with the band to find out when their next appearance will be, they have played down here before, Mario was just unaware of it. Don’t you make that mistake, catch ‘em if you can.

Michelle Bodine actually worked at my high school, and I think still did, up until last year, as a graphic design adjunct. I always knew she was in a band, and she had this sort of an aura about her, but I had never imagined her as she's pictured in Imminent. I just knew her as the cool lady that laid out the school paper. Now I wish I could go back and ask her all kinds of questions about Brainiac.

I really appreciate what you're doing with this blog. The music's fantastic and I'm learning crazy shit about my hometown that I may have guessed at before, but never really knew.

Glad to hear it. That's what this blog is all about.

Michelle Bodine has agreed to be in the film, "She"! This will have lots of bands/musicians with Dayton, Ohio connections participating with their music for the soundtrack, and some musicians, like Michelle, will act in the movie.
She rocks!

Anonymous said...
This comment has been removed by a blog administrator.
December 7, 2009 at 7:13 PM

Is there anyone that still has a copy of the Sunken Giraffe album? I had one way back in the day and thinking about it brings back such fond memories. Like getting harassed by the cops for skating at University of Dayton campus, and hanging out at the Renaissance music store. Lord I feel old now…lol. Thanks to anyone that can help an old skate punk.

I had the Sunken Giraffe cassette. Wow! Product of the Environment.

jones()
Dayton (Kettering really), Ohio, United States
I played in some Dayton bands a long time ago (SOCIAL DISEASE, FLESHBATS, THE OXYMORONS, PLANET ED, COLAVISION, HEIKE, THE VECTORS). In that time, I collected lots of tapes and records and flyers and photos and stories. Grog and Gail have contributed some more.